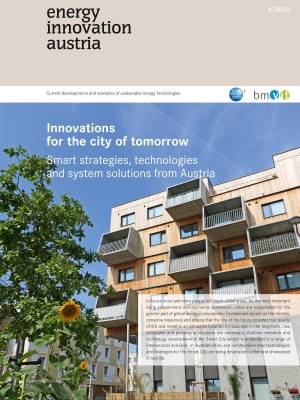 In recent years the city of Salzburg has acted as a pioneer in several energy relevant policy areas. With numerous climate protection projects to its credit, and as a showcase region for Smart Grids and electric mobility, Salzburg has a wide range of emission-reducing initiatives. Since 2008 the city’s Spatial Development Strategy includes national and international targets for climate protection. It is official policy to lower energy consumption significantly and to increase the share of renewables. Various different scenarios have been drawn up for the city’s energy future; lowering per capita energy consumption by 30 % between 2010 and 2050, and increasing the share of energy produced locally from renewables from 8.8 % in 2010 to 32.3 % in 2050, are regarded as realistic.

In 2012 a Master Plan for 2025 with which to achieve these aims was developed in collaboration with stakeholders; it contains numerous detailed projects. An interdisciplinary, multi-technology approach is employed, linking up the fields of buildings (new construction and renovation), energy production and distribution, transport, the planning of open spaces, social aspects and involving the general public to arrive at a comprehensive strategy. The development process is supervised by SIR (Salzburger Institut für Raumordnung und Wohnen). In 2013, as part of a building structure analysis, urban districts and clusters of buildings suitable for large-scale renovation were identified.

The most important project is the pioneering project Stadtwerk Lehen with almost 300 flats, shop premises, a kindergarten, a student hostel and the Life Science office complex. Here a sustainable energy strategy for an urban district has been implemented in real life for the first time. The EU Green Solar City project, part of the CONCERTO programme, had a decisive influence here.

Funds were provided for (inter alia) 2,000 m2 of solar collectors, a 200,000 l buffer storage tank, more than 250 m2 of PV modules and a low-temperature microgrid, through which the nearby residential buildings in Strubergasse are also supplied with heat. The neighbouring “Strubergassensiedlung”, an old residential complex, has been renovated with state-of-the-art technologies.

When the building structure analysis was carried out, one of the areas identified was the Goethesiedlung in the Itzling district – it may turn out to be a new pioneering pilot project. A feasibility study is currently in progress for a very ambitious energy supply system (almost carbon-dioxide-neutral), and the social aspects of renovating this 1970s settlement sustainably are being investigated.

The starting-point for the Smart District Gnigl project was the plan to build a new primary school in the Gnigl district; at the same time the kindergarten and the clubhouse next door were to be integrated in a new building complex. The Gnigl educational campus has been planned as a flagship energy project, and may well provide stimuli for the entire district. The basic principles for implementation have been worked out in an exploratory survey; they include a cost/benefit analysis for the district heating grid, and estimates of the surrounding buildings’ energy-saving potential. Ideas for transport arrangements and for involving the residents have also been developed.

EnergyCityConcept – energy modelling to achieve zero-carbon-dioxide space heating as part of an energy strategy for the Salzburg district Schallmoos
ZeCaRe – exploring/preparing for renovating a neighbourhood in F. Inhauserstraße (one of the settlements identified in the building structure analysis)
ItzSmart – working out principles for smart development in Salzburg district Itzling
HeatSwap – developing a comprehensive space-heating plan for Greater Salzburg as a starting-point for further steps in energy oriented spatial planning

Salzburg is on a development path leading to the Smart City. What are the main challenges involved?

It’s partly a matter of comprehensively upgrading the existing stock of buildings; residential areas are to be turned into really attractive parts of town by means of integrated planning, with the residents involved throughout. We also need a space-heating turnaround, i.e. reliable long-term heating free of carbon dioxide. The third great challenge is adapting the transport system, as regards both funding and public acceptance during the transition phase.

Which smart technologies and services have the most potential?

We’re primarily looking for measures and instruments to improve eco-sufficiency. Residential buildings have become significantly more efficient in the last few decades, but this gain has been cancelled out by increases in demand for space. A larger area does not always result in a better quality of life, though. I regard synergies by way of shared use as a good starting-point. Integrated urban planning can and must contribute a great deal here. Spatial planning and energy planning must be fused into energy-oriented spatial planning, so that we can make intelligent use of energy potential such as waste heat.

How will Salzburg go on developing in future – what are the next milestones?

Preparations are under way for more than one neighbourhood development project. Watching which solutions are elaborated with local residents wil be exciting. The links between energy, spatial planning and designing open spaces on the one hand, and residence and transport on the other, have a decisive influence here. I see another milestone in the phasing out of oil and gas in space heating, which we are aiming to achieve. Here I expect answers from the HeatSwap project, which has just started as part of “Showcase Region Energy”. And thirdly we could develop our strength in cycling to shift Salzburg closer to the European front runners, cities like Amsterdam or Copenhagen.