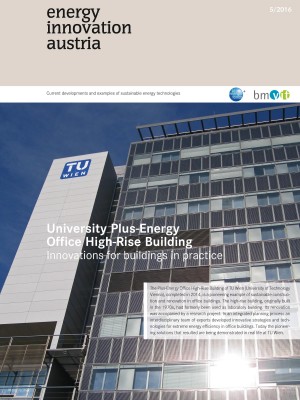 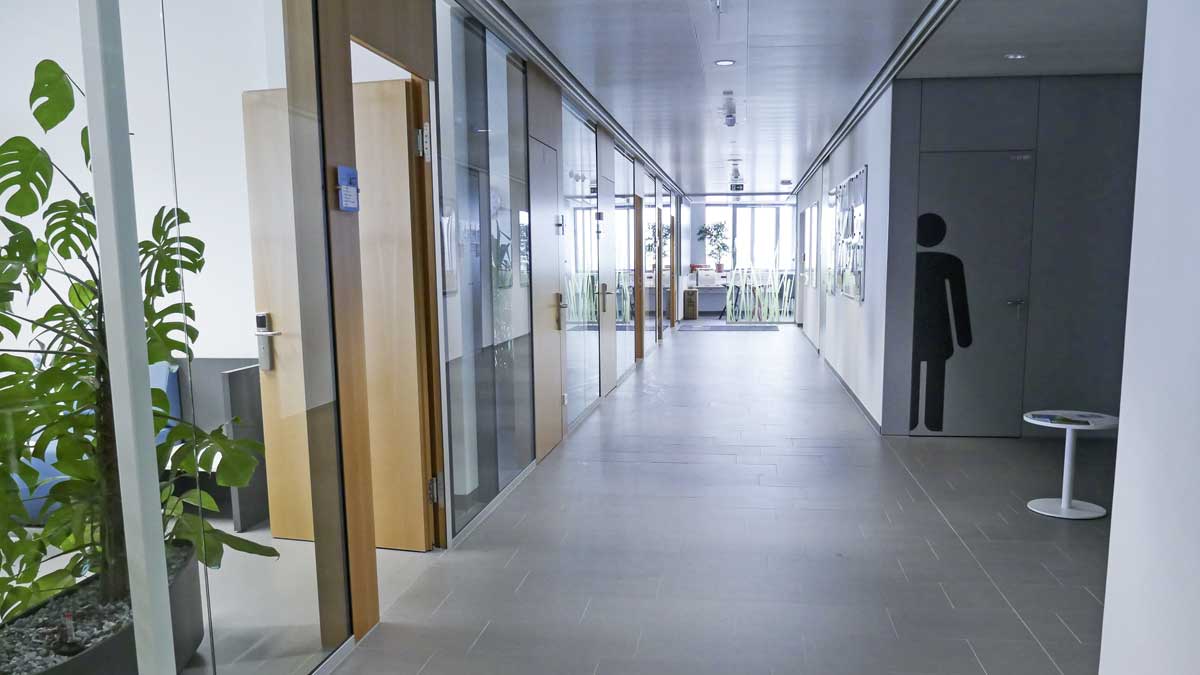 In the course of the renovation project numerous engineering solutions and new utilization concepts were developed and implemented. For office buildings to meet plus-energy standard, their energy consumption must be drastically reduced and all components must be extremely energy-efficient. A variety of steps were taken to achieve this; the central theme is reducing heat loss and heat uptake. The façade of the office tower was renovated to passive-house standard, i.e. the building envelope was made practically leak-free and insulated to avoid thermal bridges, while all pipes, fittings and assemblies were specially insulated to prevent heat loss. The south-west and the south-east façades consist of a glass-steel curtain structure with integrated PV modules. Automatically adjustable outside blinds (protected by an outer layer of glass) are provided in front of the windows.

So as to reduce the internal loads, the research team listed, improved and approved all energy-consuming components in the course of the project. Throughout the building ultra-energy-efficient appliances are on hand, but operate only when they are needed. This applies for all energy consumers, from the computers via the lighting, the ventilation system and the lifts all the way to the coffee machine. A grand total of around 9,300 components in 280 categories were improved. Today a storey in which all these measures have been implemented consumes only about 24 kWh (!) of electricity per working day – for roughly 35 workplaces.

Apart from office computers, research work at TU Wien involves large workstations, on which complex calculations and simulations are performed. Usually these facilities are located right next to workplaces, in which case they release masses of heat into the offices. As part of the renovation strategy the processes and applications requiring high-powered computing are being relocated in the server room, where their waste heat can be disposed of efficiently or recovered in order to heat the building. In future only ultra-efficient office computers and monitors for routine office work will be located in the office rooms; users can access the computers in the server room by a remote connection at any time. To date 60 % of the workstations have been transferred to the server room. This requires intelligent IT arrangements; the users are involved in planning these. Relocation is intended to cover all workplaces by mid 2017.

To light the office space LED ceiling light fittings (Zumtobel LED RAY with 110 lm/W) were selected. In the actual offices the lights must be switched on by hand. The motion detectors installed have a built-in illuminance sensor, and serve to control the lighting efficiently. The sensor measures current illuminance; the LED ceiling lights are then adjusted automatically in line with the users’ preferences. Only the amount of light actually needed is supplied. If no motion is detected in the room, the lighting is automatically switched off after a timed delay. Energy-saving recessed LED fittings with motion detectors were also installed in all corridors and stairwells.

Smart control technology is used to steer all components and systems in the office block efficiently. The building automatically adjusts toward a state in which it consumes the least possible amount of energy. However, the users are in a position to overrule this with respect to certain functions (e.g. shading with sun-blinds, or lighting) and set them by hand if the need arises.

Ever since startup in 2014 the operation of the plus-energy office high-rise building has been subjected to extensive monitoring. The system registers production and consumption of electricity, heat and cold, classified by the various groups of consumers. The energy consumed by building services (heating, cooling, ventilation and building automation) is also recorded. With a separate monitoring system for the PV facility details of the amount of electricity generated from PV are available via a web portal; with this system information about defects in individual modules or power inverters can be provided, too.

„Converting the old university tower into the first plus-energy office block worldwide reveals just what is possible with the right mix of energy-saving measures. We did not apply any unusually complex techniques, but painstaking analysis and improvements to more than 9,300 individual components resulted in dramatic savings in energy consumption. The project is scalable, which establishes its value for the future.“

Before renovation the building contained laboratories and consumed 803 kWh/m2 GFA (gross floor area) per annum. If it had been renovated to the usual standard for office buildings today, energy consumption would have gone down by around 43 %. But with the pioneering overall strategy actually implemented in the office block consumption is now down to 56 kWh/m2 GFA per annum (for building and office use) – a further reduction of 88 %.

Over the year the entire energy needed in the eleven storeys can be produced on the spot; the building produces around 5 kWh/m2 GFA more energy per annum than the office area (excluding the high-performance computers in the server room) consumes in total, and it thus fits the definition of a plus-plus-energy building. If we add on the high-performance computers needed for university research etc. (unnecessary in an ordinary office building), energy consumption goes up to 108 kWh/m2 GFA per annum.