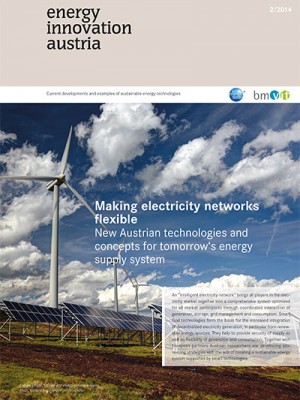 In recent years Austria has invested a lot in researching, developing and demonstrating Smart Grid technologies. How successful have these activities been so far?
By now Austria has three large Smart Grid model regions in Salzburg, Upper Austria and Vorarlberg; in each region different aspects are tested and researched into, such as the intelligent integration of customers into the network, active operation of distribution networks, ICT for Smart Grids or integrating small photovoltaic units into the grid efficiently. These are all internationally recognized demo projects and a great success for our activities so far. The model region Salzburg was even awarded the Core Label by the European Electricity Grid Initiative in 2013, and thus recognized as a European lighthouse project.

How does Austria fare in the technological field of Smart Grids in an international comparison?
Austria has already taken up position early, e.g. by founding the Technology Platform Smart Grids Austria, which does an excellent networking job in Austria among the relevant players from industry, electricity companies and R&D organizations. During the last few years a lot of R&D funding went into developing intelligent electricity networks. As a result, Austria is by now right at the forefront of the European SET Plan Initiative for power grids. Within the D-A-CH cooperation setup, experience with model projects is swapped between Austria, Germany and Switzerland. In addition experts from Austria have worldwide contacts with top institutions (e.g. from the USA and Korea) through the ”International Smart Grids Action Network” (ISGAN).

What are the next steps on the path towards a sustainable power supply system?
The electricity grids have to be upgraded to meet higher challenges, e.g. of integrating local electricity generators. That is how security of supply can be ensured in future, too. Intelligent solutions expand the capability of grids. Smart Grids make it possible to pursue a conventional network expansion very selectively and efficiently. As they are not just a single technology, but need to be developed and tested according to regional network requirements, it is still necessary to provide targeted and transparent funding for Smart Grid technologies and to implement further large-scale demonstration projects. This is essential if we want to maintain and expand Austria´s pioneering role in integrating renewable energy sources and in load management.